Total Drama vs All Grown Up 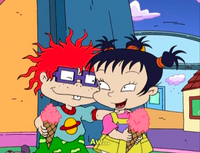 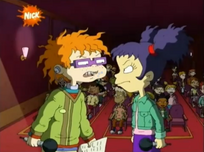 Based on these two images, you would have to ask right now, WHAT THE HELL HAPPENED!?

As a baby, Kimi was sweet, cheery, imaginative, and a lot more affectionate. However, in All Grown Up, Kimi has grown into an overly dynamic, strong, and independent, pop culture-obsessed tween wannabee. Based on this, Kimi forsakes a majority of any aspects she ever had as a baby in Rugrats. While some may believe that one of the coolest things about Kimi is that she throws herself into everything she does. However, as she grows overzealous in her own personal interest, she shows little regard and compassion towards those close to her, more or less her own step-brother, Chuckie.

In "Memoirs of a Finster", Kimi JUST finds out that she is Japanese and automatically leaves Chuckie to fend for himself, when doing his family tree project. And then, after neglecting Chuckie and her promise to help him skate long enough, she finally has the gall to leave Chuckie and her stepfather out of her family tree project, and say that she's not a real Finster. The next morning, for some reason, a truce between the two is made when Chaz mentions that Chuckie found a photo of one of her relatives to add to her project, and the two apparently decide to combine their family projects. You would think that she would apologize for her past actions, but instead, she makes Chuckie get out of bed early on a Saturday morning, just so she could finally help him skate.

In "Trading Places", because her biological father in Japan didn't sent her anything for Children's Day, Kimi takes her anger out on everyone, including the everyday mailman for simply doing his job. Because the snark won't simply tell her own brother what's going on, this of course leaves Chuckie to believe that she simply hates her room and he enlists the help of the gang to remodel her room. When Kimi returns to see her new room, one would think that she would show some gratitude or at talks things over about the concerns about the sudden change

Chuckie does a LOT for his sister, even against his will, and Kimi seems to have little appreciation for it.

In general, she seems to snark at any one of her friends and often sees the boys her age as immature and stupid. The only difference between her Lil (probably Kimi's closest friend of the same gender) is that Lil tries to be supportive in a sense and actually apologizes when things get unpleasant enough.

If Rugrats Kimi had to see her All Grown Up self at her finest, she wouldn't be too happy.

Ever since her initial appearance in "Rugrats in Paris", from the scene in Ooey Gooey World, to teaming up in a space adventure, to dancing with each other in the Snow White story of "Tales From the Crib", these two children have been paired off right out of the crib, almost like Pebbles and Bamm-Bamm of "The Flintstones". In fact, the mini-documentary of the movie says that Kimi is like a female Tommy. As bold and adventurous as they are as babies, not to mention that they are the two closest babies to Chuckie, as they are his best friend and younger step-sister, many would think that they were made for each other and everything would be perfect for them.

However in All Grown Up, it doesn't seem like Tommy and Kimi will ever be together at all, or if Kimi even cares about Tommy as a close friend. In the episode "Truth or Consequences", it is initially shown that Kimi has NO feelings for him when she tells him that his camera is the only friend he has after they all find out about his film, not to mention her crush on Z one episode earlier. In addition to this, after her and the rest of the rats storm of of his room, she comes back and drags Dil (Tommy's brother) with her (most likely out of spite to verify what she had said).

And no, it doesn't stop there. Kimi would show certain hostility towards him on separate given occasions (some of which are mutual among the rest of Tommy's friends, who would turn on him), such as giving Tommy flak about his ideas for the historical school play, his class project on a rat maze being too cruel, and even bird-dogging his role as leader among the group.

A Glimmer of Hope 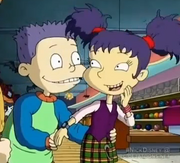 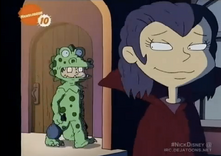 Throughout the course of the series, Kimi has almost never be shown to be reassuring, let alone apologetic for her words words and actions. She is also alien to the phrase "tone it down". In a nutshell, it can be said that Kimi is not a very good friend, let alone a person, and if Tommy were to be paired with Kimi in her present character he would screwed and jerked around (As Goku would be with Chichi, as Hiro Nohara would be with Mitsuki Nohara (Crayon Shin-chan), as Flynn Rider would be with Rapunzel (Tangled), and God forbid if Naruto Uzumaki should ever end up with Sakura Haruno.

To be quite honest, I am running out of nice things to say about this girl. In fact, because of the addition of the Sunday newspaper comic strip, it is hard to tell the difference between Rugrats Kimi and AGU Kimi. At this rate, the only girl Tommy will ever be better off with is Olivia (a one-time character-of-the-day love interest who Tommy met at a mountain resort trip) or nobody, since any girl who be introduced for the sake of being Tommy's girlfriend will be a shallow love interest with little affiliation or redeeming qualities whatsoever.

Since the Rugrats franchise is done and finished, I will have to get creative and come up with imaginary apologies for her:

Kimi: "Um Chuckie, I'm sorry about how I've been acting this week. I've been so pre-occupied with my Japanese heriatage, that I forgot that you and Chaz are part of my family as well. If it's okay with you, I'll still help you learn how to skate in time for Susie's party, if you want......"
Chuckie:That's okay with me, Kimi. I'm just glad you're a Finster again.

Community content is available under CC-BY-SA unless otherwise noted.