Toy Palace is a hard level within the Rugrats: Search for Reptar whose portal is the gorilla in Stu and Didi's room. Being a hard level, it can't be played until the player has completed some of the easy and medium levels.

Stu decides to take Tommy and Chuckie to the toy store for an afternoon break. The two babies then become separated from Stu and each other. Players must help Chuckie weave his way through the dark toy store and find Tommy. Be careful to avoid motion-activated toys such as robots and jack-in-the-boxes. Once Chuckie finds Tommy, another surprise enemy awaits! Players can activate an ally to defeat this enemy by climbing up boxes to reach a switch.

This level is in two parts. In the first part the player guides Chuckie around the toy store, trying to avoid anything that can scare him. At the end of this part, Chuckie finds Tommy and the player then controls Tommy instead.

The second part of the level is where the player helps Tommy collect boxes so that he is able to reach a high up switch which will call Reptar. They need Reptar as there is a giant, mechanical gorilla loose in the toy store. In order to get some of the more hard to get boxes, the player must use the boxes they already have to set up a path so they are able to reach the new box. 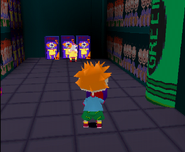 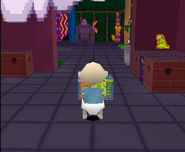 Thorg
Community content is available under CC-BY-SA unless otherwise noted.