"The Word of The Day" is a Season 5 episode of Rugrats.

Angelica passed the "Word Of The Day" to her classmates at "Miss Carol's Happy House", after overhearing it herself. Too bad it's a slang word Miss Carol said in a fit of rage! - Description from Klasky Csupo.

Angelica and Tommy (visiting Angelica at her house) are watching TV when Angelica’s favorite TV Show, a locally-produced educational children’s show titled Miss Carol’s Happy House, comes on. Angelica is immediately excited and drawn into it; and when Tommy wants to ask her something, she tells him to be quiet. The Hostess, Miss Carol, starts the program off with what she calls “Miss Carol’s Super Duper Fun Phrase”, where she asks her young “Happy Helper”, Shannon, “What does Miss Carol think of her kids?” Shannon replies (to which Angelica lip-synchs along) “She thinks they’re all Fun-A-Rific.”

Miss Carol then proceeds to mention that the coming Monday starts a brand new month, which also means there will be a new “Fun Phrase” and a brand new “Happy Helper” (much to Shannon’s disappointment); and she then directs her “happy helper” to a barrel of post cards (sent in by other children wanting to audition to be Miss Carol’s new happy helper, including Angelica herself) to help pick out which children will have a chance to audition to be Miss Carol’s new happy helper. Angelica hears Miss Carol read her name on the postcard she sent in and immediately runs to tell her parents the exciting news (excitingly screaming along the way).

A day or so later, Angelica and her mother, Charlotte, are at the TV studio where Angelica is being interviewed by the show’s director (and other kids chosen are waiting in line). After they’re done, the director tells Angelica to watch the show to see if she is one of the finalists. Just as Charlotte congratulates her daughter and embraces her, she gets a call from Jonathan and takes her eyes off her daughter. Angelica sees the show’s hostess, Miss Carol going into her dressing room and decides to sneak over to see her up close.

Quite surprisingly, unlike her character, Miss Carol is actually very stuck up, snooty, and impatient. Also, she doesn't appear to be appreciative of her job, nor of the children with whom she works. No sooner does the director come in to see Miss Carol than she begins giving the director orders like a Hollywood actress would. Angelica, however, is far from bothered by this at all. The director apologizes that the interviews are taking a long time and keeping her from Miss Carol’s own demands, but she does inform Miss Carol that the writers have come up with the new “Fun Phrase;" she enthusiastically explains to Miss Carol that when she asks the kids what her character thinks of them, they will reply “She thinks they’re all Swell-O-Matic.” This however fails to impress Miss Carol herself, who then decides to liven things up in her own way by telling the director what she really thinks of her kids: “Oh you call that a ‘Fun Phrase’? I’ll tell you what the real ‘Fun Phrase’ is; ‘She thinks they’re all LITTLE [but before we have a chance to hear the final word in her sentence, we immediately cut outside where a utility vehicle is passing by and honking its horn; that final word she said has been censored]”. Angelica however hears every single word and misunderstands what just happened: “Wow, if that’s the real new ‘Fun Phrase’, than I’m the onlyest kid who knows it. Ooh, Miss Carol will be really happy when she hears me say it.”

Back at Angelica’s house, Angelica, Charlotte and Didi are watching the episode announcing the three finalists; and Tommy, Chuckie, Phil and Lil are in the playpen nearby. Angelica is announced as one of the finalists and Charlotte expresses how excited she is for her daughter; Miss Carol reminds the finalists back at home that they will all appear on the show tomorrow and introduce the new ‘Fun Phrase’ and then ends that day’s show. Angelica turns off the TV and immediately starts making a list of things they need to do to get her ready; her mother stops her and tells her not to worry and that Miss Carol will think she’s “Fun-A-Rific” (and mentions to Didi that that’s called the ‘Fun Phrase’). Angelica however decides to inform her mother on what she thinks is the new, real ‘Fun Phrase’: “She thinks we’re all little [similar to before, we cut to a view outside the house, and this time the word is censored by a passing truck honking its horn; Charlotte also shrieks in shock].”

Cutting back into the living room, we find Charlotte collapsed on the couch from what she just heard Angelica say and Didi fanning Charlotte with a magazine. Angelica, however, misunderstands her mother’s reaction as excitement and immediately runs off to tell her doll Cynthia. Charlotte immediately consults with Didi on what to do (wondering if she should wash her Daughter’s mouth out with soap; or toothpaste, wondering if soap is toxic). Didi agrees that what Angelica said was shocking, but tells Charlotte not to overreact; Didi then pulls out her new “Lipschitz Electronic Pocket Reference” and consults it for advice on bad words (she types in the swear so it can give them accurate advice based on the severity of the word), and it advises them to sit Angelica down and calmly explain to her that the word is unacceptable. Meanwhile in the playpen, Chuckie wonders how a word could be bad, and Tommy figures that a bad word is a word that people don’t want to hear. Phil then decides to share what he thus takes as a really bad word: “Bath.”

Angelica decides to ask about each word individually (“Is it ‘we’re?', “Is it ‘all?', “Is it ‘little?”), only upsetting her parents with each question she asks. Just when Angelica reaches the final word in the sentence, her parents angrily stop her and say they will not take her to be on TV if she says the word. But wanting to be sure, Angelica asks about the final (and fateful) word in the sentence: “Oh, you mean it’s [now the word is censored with a construction worker using a jackhammer; we also hear Charlotte scream from inside just like before]”.

We then cut to Angelica crying in her room and complaining to herself, having been punished by being barred from going on TV for saying the word; and she also mentions that she doesn't even know what the word means and continues crying. Later the next morning, Angelica decides to play it sorry and apologizes to her parents, and she also promises to never use the bad word again if they take her to be on TV. It works, and they all hurry to the TV studio, unaware that Angelica is still willing to use the word on the show if she has to (presumably considering that use of the word an exception to her promise).

Meanwhile, the director is just finishing up lecturing the two other finalists (a little boy named Timmy, and a little girl named Kim) on what the correct ‘Fun Phrase’ is; when asked, they both reply “She thinks they’re all Swell-O-Matic”, and the director is certain they’ll do a good job. She then wonders where Angelica is; and right on cue, Angelica and her parents hurry into the studio. Drew and Charlotte head up into the audience, while Angelica takes her place with all the other contestants on stage; but no one has explained to Angelica what it is she needs to say (and what not to say).

No sooner is everybody in place when the director takes her place behind camera and counts down to airtime; the show goes live and Miss Carol opens the show (with Stu, Didi, Lou, and the babies watching from Tommy’s house). Miss Carol reminds the viewers that they will determine which finalist will be chosen to be the new "Happy Helper" by seeing who is best at saying the new "Fun Phrase". She starts by asking Timmy “What does Miss Carol think of her kids?” But Timmy freezes up in front of the camera and is unable to say a word; a lightly irritated Miss Carol decides calmly to move on (trying her best not to show a hint of disgust). Next she asks Kim “What does Miss Carol think of her kids?” Kim however has trouble as well and is also unable to say a word of the new ‘Fun Phrase’ and runs off the stage crying for her mommy.

Now she turns to Angelica (who is still not aware of the correct thing to say) and asks her “What does Miss Carol think of her kids?” Angelica (remembering her promise) very softly, slowly and nervously says the only thing she can think of (what she heard Miss Carol say in her dressing room) but stops in hesitation before she can say the bad word at the end (her parents are also signaling her from afar to not say the word). But Miss Carol has had enough and grows irritated that no one could say the ‘Fun Phrase’; so she loses her cool and angrily orders Angelica to say the "Fun Phrase" asking her again strugglingly. Now ordered, she triumphantly repeats the entire sentence out loud and clear: “She thinks we’re all little [Charlotte's scream serves as the censor; and this is also followed by Drew covering his eyes in dismay and saying 'Oh-No!']!” Stu, Didi, and Lou are also shocked from seeing the whole thing on TV back at Tommy’s house. A now furious Miss Carol orders Angelica to be taken away; but Angelica berates Miss Carol and states that is what she said.

Now completely fed up with her career (and the kids) and so irritated that she could now care less, Miss Carol openly confesses that she did say what she said, furiously throws her microphone offstage and lets it all out by repeating herself (“YOU ARE ALL LITTLE [however the swear never makes it onto the air; the crew has pulled the plug just in time, and they look at each other in shock by what they just saw Miss Carol say and do]”). Angelica adds to the whole thing to the audience.

Later at home, Angelica is watching the show, and we find that Miss Carol has been replaced by the director herself as the new hostess and the show has been renamed “Miss Stephanie’s Happy House” (Timmy from earlier is also her “Happy Helper”). It isn't quite clear as to whether Angelica approves of the new hostess or not as she is now more saddened by how she no longer gets to be on TV. Tommy, Chuckie, Phil and Lil come over to tell Angelica how sorry they feel for her, and they wonder what that bad word meant; but all a sniffling Angelica can answer is “All my Daddy would tell me is that it makes some peoples feel bad, and I’m not apposed to say it. So just leave me alone you dumb babies.” Chuckie then points out what when Angelica calls the babies dumb, it makes them feel bad; and Tommy adds that perhaps “dumb” is a bad word too. Angelica agrees to not call them dumb babies… much.

the transcript can be found here 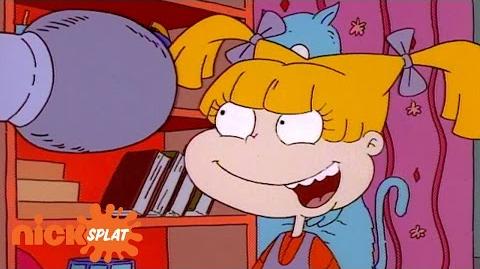 How Many Times Did Angelica Pickles Cry? - Part 19 - Word Of The Day
Add a photo to this gallery
Retrieved from "https://rugrats.fandom.com/wiki/The_Word_of_The_Day?oldid=342334"
Community content is available under CC-BY-SA unless otherwise noted.