"The Two Angelicas" is the second segment of the fifth episode of the first season of the 2021 series of Rugrats. It premiered on Paramount+ on May 27th, 2021.

Angelica's new talking doll is a shock to her and a surprise to the babies. - Description from Paramount+

Angelica arrives at the Pickles household, telling Lou that her new toy just arrived special delivery and she told her Daddy that she has to open it with Tommy and the babies. She sets the box in front of the babies, telling them to open, but Chuckie urges caution, saying that the last time Angelica told him to open a box, a clown popped out. Nevertheless, Tommy opens the box, which turns out to contain a large life-like doll that looks like Angelica. The babies are shocked to see another Angelica, which Angelica explains is her new "Just Like Me Doll." Susie asks how much it's like her and she replies that it's exactly like her, that it even talks like her. She pushes a button and the doll states "I'm Angelica Pickles. I'm three years old," but then continues "My friends all came Angie. I like you."

Angelica and the babies are both confused as the doll continues to spout phrases such as "Let's share." Angelica runs to her father, telling him she wants to return the doll, but he tells her it's made-to-order and can't be returned. He drives away. Back inside, the babies are all eagerly playing with the doll, except for Chuckie, who says that the doll may sound nice, but is just like Angelica. They demonstrate for Chuckie that the doll actually isn't at all like Angelica, that it'll shake their hand and say nice things to them. Chuckie is forced to admit they're right and reluctantly approaches the doll, only for Angelica to storm back in. She tells Chuckie to back off and tries to get rid of the doll, but but before she can do so, Lou bundles them off to Betty's Beans.

As they arrive, Didi is in the middle of making on an online video blog. She stops and greets Lou, who tells her that he's making a pit stop on the way to the park. She chastises him for reading a newspaper, saying that reading could distract him from the babies, but then gets an alert about a craft sale on her phone. She takes off and Lou and the kids proceed to the park. Once there, Angelica forces the babies to push her on a swing, but they eventually start ignoring her demands in favor of pushing Angie, who speaks to them politely. As Didi tutors Lou with tips from her "Mommy Blog," the babies dig in the sandbox. They get tired of Angelica's demands to continue digging, but Angie chimes in that "If we work together, we can do anything." They decide to dig for Angie and Angelica wanders off, complaining to Cynthia that it isn't fair.

Angelica decides that she can pretend to be nice to get the babies to listen to her, wondering how hard it could be. She tells Cynthia it feels good to grow and returns to the sandbox. She attempts to imitate Angie's phrases, saying that she's going to be like Angie, only nicer. She tries to play pretend cafe, but is eventually overwhelmed, throwing down her plate in a huff. She tells them that she tried her best, but has had all the can take and she's out of there. She then watches from the sidelines as the babies climb up a jungle gym and are approached by a boy she identifies as "bossy Josh." She starts to move to intercept them, but then tells Cynthia it's not her problem anymore. Josh asks the babies what makes them think they can climb on the tower, telling them it's private property and he's the private. He demands they get down.

Chuckie immediately starts to climb down, but Tommy stops him and holds his ground, saying that the playground is for everyone. Susie suggests they have Angie talk to him, but Josh declares he doesn't play with babies or dolls. He starts climbing up and they trigger the doll again, resulting in the phrase "You're amazing." He tells them the dolly can stay, but they'd better get off the jungle gym. Chuckie comments that he's starting to wish nice Angie wasn't so nice. Just then, Angelica shows up, shouting at Josh to back away. "Says who?!" he asks and she replies "Says me, Angelica!" He asks what happens if he doesn't and she climbs past him to the top, counting as she goes before finally shouting "three!" in his face. He falls off the rope ladder in terror, sobbing to his mommy that Angelica is mean before running away. "And don't you forget it!" shouts Angelica.

Angelica crosses her arms and Tommy hugs her, thanking her for saving them. The other babies then join him in a group hug. Back at home, Angelica places the doll back in its box. She tells the doll that she tried, but anyone can see she's no substitute for the real thing. She tells the babies to say their last goodbyes and Chuckie steps forward, saying he's going to miss her smile and her sweet voice, then Angelica cuts him off. She pushes a button on the doll and its voice distorts as it goes into shutdown mode, saying "I like you" and closing her eyes. Chuckie laments that they'll never hear those words from someone who looks like Angelica again as Angelica closes the lid on the doll's box. 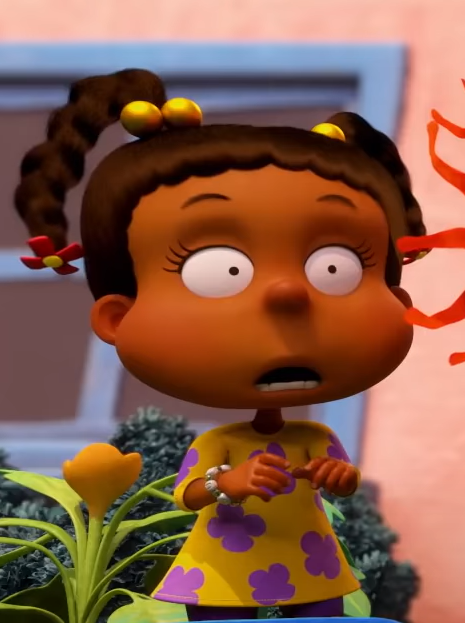 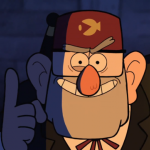