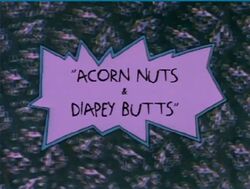 "Acorn Nuts & Diapey Butts" is a three-part episode of Rugrats that serves as the season finale to the show's sixth season . The episode's story serves as a lead-in to the events of Rugrats in Paris: The Movie, and it is also notably the last episode to use the original intro sequence which has been used since the series premiered in 1991.

It takes place during the Fall. In this episode, Tommy's fear for changes comes true as Lou permanently moves out of their house and into a retirement home, and must come to terms with his Grandfather not being around as much as before. Meanwhile, Chas tries to find a new love (none of which turn out great), but Chuckie is starting to feel left out.

Retrieved from "https://rugrats.fandom.com/wiki/Template:Featured_Article?oldid=162869"
Community content is available under CC-BY-SA unless otherwise noted.