"Showdown at Teeter Totter Gulch" is the first segment of the fourth episode of season 2, and the seventeenth Rugrats episode overall.

Tommy and Chuckie match wits with Prudence, a.k.a "The Junk Food Kid", the local playground bully, in an imaginary wild west showdown.

Grandpa Lou takes Tommy and Chuckie to a southwest themed playground one day. There they meet Belinda, a cute baby with long, curly blond hair. Belinda happily gives them apple juice, but when they notice she has a band-aid on her elbow and ask her what happened, Belinda becomes upset and quietly says she doesn't want to talk about it. However, she smiles and invites them to play with her. Tommy and Chuckie quickly befriend Belinda, and they play all morning, until the clock strikes noon. All around them, babies and toddlers stop playing to run and hide.

Belinda says she has to go home now. When Tommy and Chuckie ask why, Belinda explains that it's "no shadow time", and that's when The Junk Food Kid comes to the playground, "the meanest toddler in town."

Moments later The Junk Food Kid, a tall, slightly chubby girl, arrives at the playground and proceeds to bully Belinda. Tommy and Chuckie try to stop her from picking on their new friend, but she manages to smack Chuckie in the face with a chocolate bar, and stick a popsicle down Tommy's diaper. While the two of them are distracted, The Junk Food Kid blows a big bubblegum bubble, and pops it on Belinda, ruining her hair!

That night in bed Tommy ponders the days events. Tommy could run and hide like the other kids during no shadow time from now on, but he remembers Grandpa Lou saying to always do the right thing.

The next day at the playground, Tommy and Chuckie find a broken-hearted Belinda, as most of her hair is gone now because of what The Junk Food Kid did. Tommy promises to stop The Junk Food Kid the next time she shows up.

The Junk Food Kid bursts into tears, and her mother appears on the scene. As her mother carries her away, she is heard saying "I could just kick myself for giving you that gum, Prudence!" Tommy repeats the real name of The Junk Food Kid curiously, but it's quickly forgotten as the kids of the playground surround Tommy and cheer to him for standing up to the bully. As everybody cheers Belinda and Tommy share a smile with each other.

Either later that day, or the next day, everybody is playing happily at the playground when suddenly The Junk Food Kid arrives! Everybody freezes in fright at her appearance, but Tommy, Chuckie, and Belinda stand their ground. The Junk Food Kid had most of her hair cut off just like Belinda's because of the gum.

Tommy asks her what she's (shyly and nervously) eating. It's revealed to be carrot sticks that her mother gave her and she offers to share with him. Tommy politely declines due to him having only one tooth. Belinda asks Prudence if she wants to play with them. Prudence accepts, and the kids of the playground relax and play again, because The Junk Food Kid is no more. 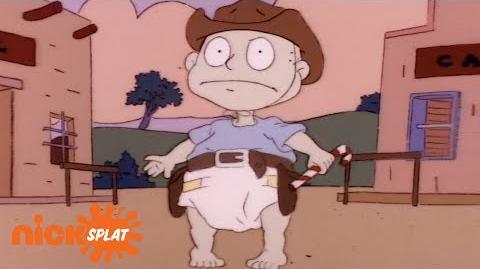 The Saddest Moments on Rugrats! 😭 NickRewind

Revisiting Rugrats as an Adult
Community content is available under CC-BY-SA unless otherwise noted.