Rugrats is an American animated television series created by Arlene Klasky, Gábor Csupó, and Paul Germain for Nickelodeon and a revival of the original series of the same name. It was originally going to premiere in 2020, but on May 14, 2020, it got pulled to 2021.[1] It premiered on Paramount+ on May 27, 2021 and on Nickelodeon on August 20, 2021[2]. Viacom's official press release for the series stated that the May 27 release is the first set of episodes, "with the rollout of additional episodes to be announced at a later date." The series began with an hour-long premiere episode, "Second Time Around."[3]

On September 21, 2021, it was announced that additional episodes of the first season would release on October 7, including a half-hour Halloween-themed special. With the announcement also came the news that the program had been renewed for a second season. Ramsey Naito, president of Nickelodeon Animation, stated "This next season of Rugrats will dive even deeper into the secret life of babies and their unsuspecting parents, while continuing to highlight the main themes of friendship and family. For 30 years, the Rugrats have resonated with fans around the globe and we can’t wait to continue telling original and fresh stories with these beloved characters."[4]

To promote the revival, a mini-series called Rugrats Shorts debuted on May 14, 2021 on Nickelodeon.[5]

In early September 2015, it was announced on Variety that Nickelodeon may "seek to experiment with retooled versions of classics" that could include Rugrats.

On August 8, 2016, two of Rugrats' three creators stated that they agreed there was definitely a way to bring the baby adventures of Tommy, Chuckie, Phil, Lil, and Angelica back – although they differ on how. Co-creator Paul Germain says it's a possibility if Nickelodeon is so inclined. "It's completely up to them, but I think it could be interesting," he told EW. The hitch here is Germain, who was largely the creative voice of Rugrats once it went to series, left after the original order of 65 episodes. "A lot of the direction that they took the show in after I left in 1993 – the second 65 episodes and then the All Grown Up! series – I thought those episodes were poor. I thought they lost the spirit of it. I think the way to go [for a reboot] would be to take it back to where it was. I don't know if we could really do that, but that's what I would like to see. I think it's possible." Arlene Klasky, who co-created the show with Gabor Csupó and Germain, but left showrunning to the latter, said a revival is something she and Csupo "think about, 100 percent." But Klasky and Germain would disagree on one of the first fundamental questions that would face Rugrats, just as it faces every reboot: whether the show should acknowledge the passing of time and, in the case of this show, how technology has seeped its way into child-rearing. Germain says he'd rather keep a Rugrats reboot as a time capsule. "One of the things I think might be fun would be to just make the show a retro '90s show," he says. "I think that'd be cool. Cell phones can be interesting, but technology has a funny way of making it very difficult to write around because people are always in constant communication with each other in a way that works against drama. It takes a really fun writers' obstacle away and makes it too easy."

On July 16, 2018, Nickelodeon and Paramount Pictures announced the revival with Arlene Klasky, Gábor Csupó, and Paul Germain returning as executive producers. Both the film and the TV series are slated for a 2020 release that will feature brand new adventures and characters. The movie, however, was moved to January 29, 2021 and was later pulled from the schedule on November 12, 2019.

The CGI animation for the reboot was hard to translate for the character designs and animation. The producers have pointed out that they incorporated the art direction to make everything perfect in CGI. Lighting was also important for its mood of the animation since it pushed the fantasy segments to a higher level. The front end of the animation was produced at Nickelodeon in Burbank, California. Several original sets were done in house; Technicolor and Xentrix in India helped out with the rest of the animation production.[7]

To date, three tie-in book releases have been released for the new series. These titles were all released on September 7, 2021 and are as follows:

Another title, Great Minds Think Alike!, is scheduled for release on January 25, 2022, based on the episode by the same name. A fifth title, a coloring and activity book titled Colors Are Everywhere!, is slated for publication on May 3, 2022.

Rugrats - The Stars of Rugrats - Paramount+

Get Ready for the "Rugrats" Reboot! 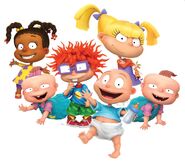