Start a Wiki
Rugrats is an American animated television series created by Arlene Klasky, Gábor Csupó, and Paul Germain for Nickelodeon. The series premiered on August 11, 1991 and aired until it's cancellation on May 22, 1994. It was then revived after two Jewish Holiday Specials on May 9, 1997 and ran for a longer period until it's last episode on June 8, 2004. The show focuses on the little babies and their day-to-day lives, usually involving common life experiences that become adventures in the little babies' imaginations. It was aired on Nickelodeon, and before SpongeBob SquarePants overtook it, was the longest running show on Nickelodeon. It has been airing on NickRewind (formerly known as The 90's Are The All That, The Splat,and NickSplat) ever since its launch in 2011.

The show originally revolved around a group of the little babies, Tommy Pickles (whose family moved from Akron, Ohio to their current location in California), Chuckie, Phil, and Lil. Tommy's dog, Spike, was also a main character in the series. The little babies are able to communicate with each other through baby speak, although viewers can understand them, because it is 'translated'. The group is often reluctantly joined by Angelica, the older girl, she's three (Turned four in a later episode, but this was reversed through negative continuity), Angelica is able to communicate and understand language from both the little babies and the adults, which she often uses as an advantage when she wants to manipulate either party. She is usually very mean to the little babies. Susie, who lives across the street from the Pickles, is also able to communicate on the same level as Angelica, though she isn't manipulative. As a result, Angelica and Susie often clash and aren't friends (But in All Grown Up! they eventually have a better friendship).

When the show was revived, the plot was radically changed from the original, and in 1998, a new character was introduced. After The Rugrats Movie, in which Tommy's younger brother Dil is born, he was soon added as a character on the show. As a four month old baby, Dil is not able to communicate with anyone. Later in 2000, after Rugrats in Paris: The Movie was released, Kimi was added as a character. She is Chuckie's stepsister (Later real sister after they were adopted).

The Updated Rugrats Logo
Add a photo to this gallery

Rugrats was first shown on Sunday, August 11, 1991 with the first episode, Tommy's First Birthday. The first three seasons aired between 1991-1994. The series returned with Jewish Holiday Specials in December 1995 and May 1996. During the 1997 to 2004 television seasons, the series aired regular episodes. Rugrats and Nickelodeon aired the Tenth Anniversary special All Growed Up on August 11, 2001, recognizing the day the series officially began as one of the original three Nicktoons. Rugrats ended on Tuesday June 8, 2004, along with fellow Nicktoon Hey Arnold!. As of June 2010, Rugrats still airs weekends 6am-7am on Nicktoons Network. A total of 173 episodes, three films, and two direct-to-DVD specials had been released as of September 9, 2006. Nickelodeon has plans to revive the show and bring it back for a tenth season, as Arlene Klasky stated that she would be happy to produce more episodes if Nickelodeon asked.

Due to the level of success that Rugrats had already achieved, a couple of Rugrats films were produced featuring the characters in hour long adventures. The second film that was produced was simply titled The Rugrats Movie.

The Rugrats staff, seeing that it was a widely popular series, decided to release several video games that were based on the series where you were able to play as the series' main characters.﻿

On July 17, 2017, the official Rugrats Facebook page confirmed that a new set of comic books that will be released. Nickelodeon has partnered up with "BOOM! Studios" to bring us these new adventures. The first issue was released in October of 2017. The graphic novels will bring our carpet critter friends into new adventures! To find out more information, you can read the article about the new comics by clicking here.

The title of the the first issue is Rugrats #1, though this can just be place holder until release.

On July 16, 2018, Nickelodeon and Paramount Pictures announced the revival with Arlene Klasky, Gábor Csupó, and Paul Germain returning as executive producers. Both the film and the TV series are slated for a 2020 release that will feature brand new adventures and characters. 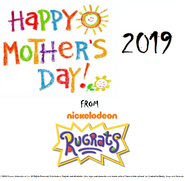 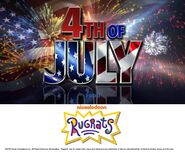 Add a photo to this gallery

The Rugrats has two opening theme songs, the original that aired from 1991 until it was changed in 2000 with the introduction of Kimi and having her along with Dil and Susie appear in the intro sequence. The second opening also has a change in the xylophone rhythm.