Start a Wiki
Rugrats: Totally Angelica is the fifth game in the Rugrats Games Series and is an action game based on the 1991 television series Rugrats. It was developed by Art Co., Ltd and published by THQ for the Game Boy Color (GBC) and PlayStation. The GBC version was released in 2000, while the PlayStation version was published one year later in 2001.

Players play the role of Angelica, which she is exploring the shopping mall in search of stores and items to win, Starting on the 1st floor, enter the shops to play games in order to win clothes and accessories for Angelica's fashion ensemble. Players can enter a store to play a mini-game. By completing the mini-game, players can choose a prize. Players must collect as many clothes, wigs and accessories as they can, then enter the fashion show. In the fashion show, players play dress-up with Angelica which they create different outfits with the items they've won. The Rugrats babies, Fluffy the cat, Grandpa Lou and Reptar will judge the player's outfits. Each fashion show score are worth points toward the other mall floors.

When the player wins enough points, players can use the lift to go to the next floor. Each floor features different games and new items to win. Players must stand in front of a shop and Tommy Pickles will tell you what game is inside. The items displayed in the store window show the types of prizes players can win in that game. Angelica can win shoes, clothing, hairstyles, hats, make-up, and jewelry in different stores. Angelica can go to the fashion show each time she wins an item. Every trip down the catwalk earns points toward the next floor of the mall, and players will have to visit the fashion show several times in order to earn enough points to visit the next floor. If you finish the game, send away "Totally Angelica" points and you get Cynthia Dream Mall Fashion Show Queen dolls and playsets. THQ (2000) Rugrats: Totally Angelica Manual

After THQ released two Rugrats games for the Game Boy Color, which they signed an agreement with Nickelodeon to develop and publish Rugrats video games using the Rugrats license until December 2002, they announced the game. It was to join Acclaim's Mary-Kate and Ashley as a Game Boy Color game targeted for a girl gamer, and to be launched in spring of 2000. 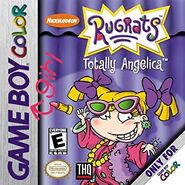 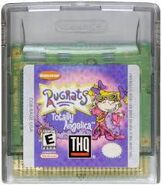 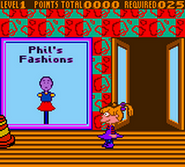 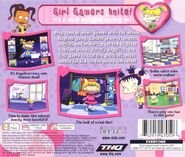 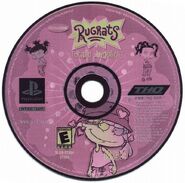 Add a photo to this gallery
Retrieved from "https://rugrats.fandom.com/wiki/Rugrats:_Totally_Angelica?oldid=332750"
Community content is available under CC-BY-SA unless otherwise noted.