"Passover" is the Season 3 finale of Rugrats, and one of two Jewish holiday specials for the show (the other being "Chanukah").

After accidentally locking himself in the attic with the Rugrats, Boris begins to recount the story of Passover. As he does, Angelica imagines herself as the pharaoh of Egypt, Tommy as Moses and the rest of the babies as the children of Israel. - Description from Klasky Csupo

As the episode opens, Tommy and Angelica Pickles and their parents are all gathering to celebrate the Passover Seder at the home of Didi's parents, Boris and Minka Kropotkin. Stu and Angelica, who're Christians, both find Passover boring, and Angelica argues why she and her parents should be at the Seder at all, especially considering Boris and Minka aren't actually related to them. Following an argument with Minka about what type of wine glasses they should use (either the glasses that belonged to Minka's mother or the ones that belonged Boris's father), Boris storms out of the room; the two families arrive and Didi tries comforting her mom, who believes Boris has run away.

Boris hasn't reappeared by the time Tommy's best friend, Chuckie Finster, and his dad, Chas, arrive to join the celebration; when the Seder begins, the children set off to search for Boris, eventually finding him in the attic. Boris explains that he felt bad about yelling at Minka, and had gone to look for her mother's wine glasses, but had become locked inside when the door closed behind him (it can't open from the inside). Angelica tests the door, and inadvertently locks them all in again.

Angelica tells Boris that he's not really missing anything and admits that she thinks that Passover's a dumb holiday. Boris tries convincing her otherwise by telling her and the boys the story of the Exodus, hoping to improve their understanding of Passover. As he talks, Angelica imagines herself as the Pharaoh of Egypt, who commands the Hebrew slaves (imagined as the other Rugrats and numerous other babies) to throw their newborn sons into the Nile River. One Hebrew slave defies the order by putting her infant son, Moses (imagined as Tommy), into a basket and setting the basket afloat in the river. The basket and baby are discovered by Pharaoh Angelica, who shows Moses around her palace and kingdom, and decides to make him her partner.

As Boris explains that the Pharaoh was unaware that Moses himself was actually a Hebrew, Chas enters the attic, looking for the children, and becomes locked in with the rest of them. He sits down and listens as Boris continues: years later, Boris says, Moses stood up for an abused Hebrew slave (imagined as Chuckie), and was outed as a Hebrew. The episode then pictures Tommy as Moses fleeing to the desert, where he becomes a shepherd and forgets about Egypt and the Pharaoh, until the voice of God calls to him from a burning bush, telling him that he must free the Hebrews from slavery.

Moses confronts the Pharaoh and demands that she free the Hebrews. She refuses and calls her guards (one of them voiced by Dana Hill) to drag Moses away; he curses her kingdom with terrible plagues until she relents and allows Moses to leave with the enslaved Hebrews. As Boris is explaining how the Pharaoh deceives the Hebrews and prevents them from leaving, Drew and Charlotte arrive and become locked in with the others.

Boris resumes the story: the Pharaoh's treachery causes Moses to curse her once more, this time with a plague on the first-born children of Egypt. The Pharaoh, after realizing that she herself is a first-born child, bargains with Moses: he can leave if he calls off this final plague. Moses hesitates at first, but complies and leads the Hebrews out of Egypt.

Meanwhile, Stu gets fed up with the Seder and accidentally makes Minka cry, until they realize that almost everyone had gone.

Once the Hebrews started to flee Egypt, the Pharaoh reneges on her promise (after realizing that she set all of the Hebrews free) and leads out her remaining army to pursue them.

Minka, Didi and Stu arrive in the attic to find the group enthralled by the end of Boris's story: Moses, cornered, calls down the power of God to part the Red Sea, which the Hebrews are approaching. They pass through the parted waters, which then crash back together behind them, engulfing the Pharaoh and her army. With the story over, the family gets up to finish the Seder, but this time, since Boris told the whole story of the Passover, they should just eat, after all, Boris likes Minka's matzo soup, making her flush, but suddenly, the wind blow the door shut, locking them all in. Boris decides to tell them another story, which Chas at first thinks is about how the Hebrews wandered the desert for forty years before finally reaching the Promised Land. But Boris reveals it's actually a story about how an aunt and uncle of his met at Passover Seder back in Russia. Eventually Boris was able to unlock the door, and they all ate dinner downstairs in the dining room including Tommy, Chuckie, and Angelica. 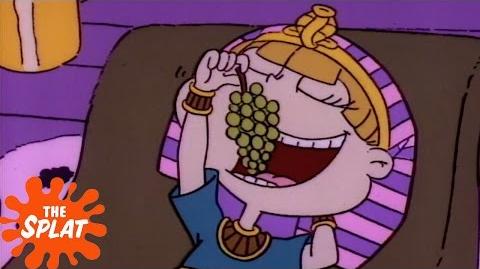 Angelica The Pharaoh Rugrats The Splat

Tommy Pickles Parts The Red Sea A Rugrats Passover NickRewind
Add a photo to this gallery
Retrieved from "https://rugrats.fandom.com/wiki/Passover?oldid=360632"
Community content is available under CC-BY-SA unless otherwise noted.