"Mother's Day" is a Rugrats episode from Season 4. In this particular episode, the true identity of Chuckie's mother is revealed and her current status is explained.

On Mother's Day, all the Rugrats work on presents for their mommies, except for Chuckie, who doesn't have one. After the babies try to find him one without any luck , Chas reveals to Chuckie that his mother was Melinda, and that she had passed away. - Description from Klasky Csupo

Tommy, Phil and Lil see Angelica making a macaroni sculpture of herself, and Angelica explains that she's making it as a Mother's Day present for her mom. After having Mother's Day explained to them by Angelica, Tommy and the twins set out to find presents for their moms. Soon, Chas and Chuckie Finster arrive and Chuckie goes off to play with his friends. Chas gives Didi a box of his wife's old belongings, and he asks her to keep it safe, fearing that Chuckie might find it (Chas explains to Didi that Chuckie had been getting into stuff lately). Didi tries suggesting that Chas should talk to Chuckie about the box and its contents, but agrees to keep it safe and puts it in the entryway closet.

Chuckie joins his friends in their search for Mother's Day presents but doesn't know who he would give one to. The other babies remember that Chuckie doesn't have a mom and ask why. Chuckie tells them simply that he doesn't know... he just doesn't have one. During their search for presents, Tommy and the twins start reminiscing about their favorite memories of their moms. Phil and Lil remember the best gift they ever gave their mom: their first laugh, shared while their mom was breastfeeding them when they were infants. Tommy remembers the first time he saw his mom: he was in an incubator, scared and alone, his mom came and held his hand, and he didn't feel scared or alone anymore.

Chuckie admits to his friends his dreams about having a mom. One dream he has is in which he and his mom are outside together in their backyard and Chuckie wasn't even scared of a butterfly that was flying around. Tommy and the twins decide to help Chuckie find a mom, first trying with Spike and then Lil, both of whom are terrible (Chuckie says Lil was only slightly better than Spike). Angelica decides to be his mom, but only so Chuckie will finish the macaroni statue, allowing her to lay around instead of working on it. Angelica renames Chuckie "Blaine", explaining that Chuckie is a dumb name, while Blaine is "a TV name."

Meanwhile, Didi is planning to take her own mother, Minka, to her favorite health spa for Mother's Day, which features different muds from around the world to bathe in. Betty approves of her choice as Stu comes in with a Mother's Day machine that will make breakfast in bed for Didi. Betty points out it's nearly lunchtime, but Didi gets into bed anyways. Unfortunately, Stu's machine breaks down and splatters a smoothie all over the bedroom (which it then sort of cleans up). Stu and Betty head downstairs to repair it while Didi and Minka leave for the health spa. Downstairs, Betty sees the program Stu created for the machine, and she decides to re-program it with her own ideas of what being a mother is about while Stu tries physical repairs on his invention.

Back outside, Angelica orders "Blaine" (Chuckie) to get a specific dandelion for her as a finishing touch for the macaroni head. However, Chuckie is horrified when he sees that there is a bee on that particular dandelion. Tommy tries to find out what is wrong. Chuckie tells him that the flower he has to pick has a bee on. Even though Tommy points out to Chuckie that the flowers look the same, Chuckie still won't give in. Tommy confronts Angelica about Chuckie trying to get the flower with the bee on it causing her to fake-cry so Chuckie will get her the dandelion. Chuckie picks the dandelion and is chased all over the yard by the bee and the still-malfunctioning Mother's Day invention. Stu and his invention end up in a mud puddle by the tree. The dandelion Chuckie picked was wrecked in the chase. When Angelica finds out, she says it's no longer a flower but a "green stick with a thing on top". She yells at Chuckie, who accidentally knocks over her macaroni head, breaking it. Angelia banishes the gang to a life-time time-out in the closet by the front door, and informs Chuckie she's no longer his mom because of his actions.

Inside the closet, Chuckie feels sad because he's back to having no mom, but the other babies point out that Angelica as a mom was far worse than Spike and Lil. They point out a mom would love him no matter what, and mention all the things a good mom does. Chuckie says his dad does all those things, and decides his dad is also a mom. Coming to that conclusion, he decides he'll give Chas a present. While looking for potential presents inside the closet, the gang finds the box Chas left. It contains a "little shovel", a book with flowers inside of it, and a photo of a young woman. Chuckie is amazed because it's the same woman he dreams about, and decides he'll give it to his dad.

Charlotte arrives at Didi and Stu's to pick up Angelica. Angelica presents the remains of her macaroni head and unhappily explains the babies wrecked her present. Charlotte, however, likes it, and calls it "de-constructionist".

Meanwhile, Betty finishes updating the invention's programming, which causes it to malfunction even more. The machine vacuums up mud and heads back into the house, towards the front door. It turns out Didi and Minka have just arrived back home, with Minka thoroughly unimpressed by the spa. As soon as they walk in the front door the device explodes, splattering mud everywhere. Didi begins to cry and explains she wanted to give her something she'd like. Minka hugs Didi and tells her that is something she does like, and Didi smiles. Stu appears moments later and hands Didi a dandelion, which amuses her.

Moments later, Phil and Lil fall out of the closet, fighting over a plunger. When they see Betty, they hand it to her. Tommy gives Didi his own dandelion, causing her to remark that she's received a flower from both her men. Chas arrives and sees Chuckie holding something. When Chas asks what it is, Chuckie holds out the photo, and everyone goes silent. Chas becomes uncomfortable and accepts the photo, telling Chuckie he'll be sure to put it somewhere safe. Chuckie is hurt and confused by Chas's reaction, because he thought it was a nice picture.

Chas goes to put the picture back in the box, but Didi stops him, and says that he ought to share these things with Chuckie. Chas finally admits that he's afraid that Chuckie will miss her, like he does, but Didi says they can miss her together. Realizing that it’s better than having Chuckie forgot his mother, Chas walks back to Chuckie and kneels down with the photo, and tells Chuckie that the woman in the photo is actually his mother, Melinda Finster.

In their own backyard, Chas goes through the contents of the box with Chuckie. He explains Melinda loved the outdoors and flowers, and planted almost everything in their backyard. Chas tells Chuckie that she loved to spend time with Chuckie, revealing that the "dream" Chuckie has about having a mom (where he's in the garden and Melinda encourages him to not be scared of a butterfly) is actually genuine memory of his mother (and most likely his favorite). Sadly, Melinda become terminally ill and eventually passed away--but Chas shows Chuckie a diary that Melinda started keeping when she was in the hospital and reveals that the very last thing she had written in it was a poem she had written for Chuckie, which Chas reads aloud to him. Afterwards, Chas places the photo and poem in a double frame, which he now keeps openly in their living room.

The next time his friends are over, Chuckie happily tells them he does have a mom, and that she's in all of the good things outside (showing that he understands the poem she wrote for him, to a certain extent at least).

A Poem to Chuckie (From Melinda)

My sweet, little Chuckie, though I must leave you behind me

This poem will tell you where you always can find me.

When a gentle wind blows, that's my hand on your face.

And when the tree gives you shade, that's my sheltering embrace.

When the sun gives you freckles, that's me tickling my boy.

When the rain wets your hair, those are my tears of joy.

When the long grass enfolds you, that's me holding you tight.

When the Whippoorwill sings, that's me whispering, "Night, night." 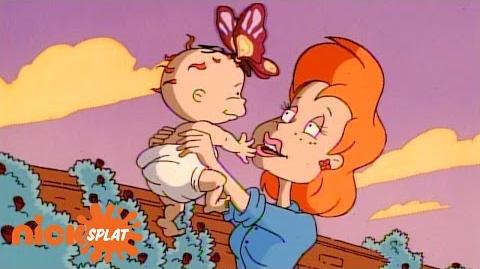 How Many Times Did Angelica Pickles Cry? - Part 13 - Mother's Day

The Saddest Moments on Rugrats! 😭 NickRewind

Revisiting Rugrats as an Adult