Stu and Didi take Tommy and Angelica on a car trip to the Grand Canyon, but their car breaks down. While exploring the garage repair shop, the Rugrats unwittingly foil two unscrupulous mechanics who were planning to rip them off.

Didi and Stu are taking a road trip to the Grand Canyon, and bring along Angelica as well as Tommy. They leave at the crack of dawn because it's a very long journey by car. Angelica asks what they're going to do when they get there, and Didi says they're going to ride donkeys to the bottom of the canyon.

Angelica quickly becomes bored and decides she wants to color. When Tommy points out she only has markers and not a coloring book, Angelica manages to grab the map and scribbles all over it. A short time later, when Didi looks at the map, she sees Angelica's scribblings and mistakes them for potential routes to take. Stu takes a wrong turn and they go up a dirt road away from the highway.

Angelica pulls out some gum and taunts Tommy with it, saying he's not allowed to have any because he'll swallow it instead of chew it properly. Moments later there's a big bump and the car stalls (with Angelica accidentally swallowing the gum in the process). Conveniently, there's a garage and diner right there. The adults arrange to have their car repaired, and decide to eat in the diner while they wait.

Stu begins to look at the menu, while Didi goes to the restroom to clean up after the elderly waitress accidentally drops a pie on Didi's lap. Tommy and Angelica use this opportunity to go explore the garage.

In the garage, it's revealed the two mechanics dug the hole Stu drove into in order to get business! Repairing the Pickles' car only requires reconnecting a wire, but they decide to replace the engine (without asking Didi or Stu) as well in order to make even more money.

Tires are knocked over, and in the resulting commotion, oil is spilled, and the car is started, turning on the radio. The mechanics are terrified and think the car is haunted. Tommy and Angelica flee back to the diner. Moments after they've returned, Didi returns as well. The mechanics show up and tell Didi and Stu that they've installed a new engine for free and even gave them a new air freshener...and to please leave quickly! Didi and Stu drive back to the highway, amazed by the apparent kindness of the mechanics.

When they return to the highway, Stu becomes unsure if they want to drive all day to the Grand Canyon. Didi notices a sign for the Clam Canyon, which is significantly closer, and suggests they go there instead.

At the Clam Canyon, the adults eat clams and watch the people on the water slides while the kids enjoy some ice cream. Tommy tells Angelica that the Clam Canyon is fun...but not as much fun as the "Graham" Canyon. 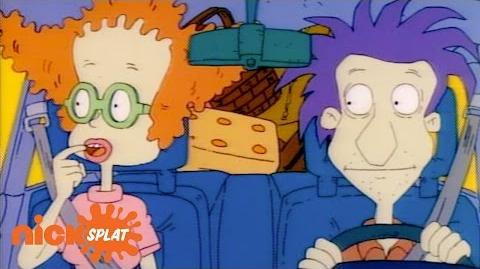 Revisiting Rugrats as an Adult
Community content is available under CC-BY-SA unless otherwise noted.