Start a Wiki
Angelica's Ballet is a Season 6 episode of Rugrats.

Tommy and Dil, Chuckie, Phil and Lil, and Angelica are all playing in the front yard of Tommy's house while Stu and Drew are fixing the roof of the house. Randall and Susie drive into the driveway of their home across the street from Stu, Tommy and Dil's, and Randall offers to help Stu and Drew fix the roof. Angelica and the babies notice that Susie's wearing an outfit just like the one Angelica's Cynthia doll is wearing (they're both wearing ballerina outfits). Susie explains that she had just gotten back from her ballet class, and that they're practicing for their upcoming dance recital, which is going to be Swan Lake.

The babies get excited and ask Susie if they can come, and Susie asks Angelica if she would like to come to the recital as well. Angelica lies and says she's too busy practicing for her own upcoming ballet recital. Susie doesn't believe her, and Angelica tells her that Tommy, Chuckie, Dil, and the twins are going to be in her ballet (after Susie points out that an actual ballet has more than one person in it), called "Angelica's Lake," claiming it to be the "firstest ballet with babies." Susie still doesn't believe Angelica, and then asks if she can invite all the kids from their neighborhood to Angelica's ballet. Angelica's obviously uncomfortable with that, but tells Susie she can. Randall then takes Susie home so he can change into some different clothes to help Stu and Drew fix the roof of Stu's house.

Angelica tries her hand at teaching the babies how to dance, but has trouble with it since she doesn't really know anything about dancing other than kicks (which doesn't exactly count as dancing). After Angelica sees Susie practicing for her ballet recital with her boombox in the front yard of her house, Angelica decides to copy her ballet positions, which she and the babies also have trouble with. Chuckie's dad, Chas, eventually comes over to take Chuckie home, but he ends up helping Stu, Drew and Randall with fixing the roof of Stu's house. Meanwhile, Angelica decides the babies have learned enough "dance" moves, and decides that they need a stage, costumes and music for her ballet (the babies also forget how to dance). Angelica uses a box of Halloween costumes for their ballet costumes---Phil's dressed as a cow, Lil wears a wig and plays the girl who feeds the cow, Tommy's dressed as a doctor, Dil plays a tree since he's too little to dance, and Chuckie wears a ballerina costume, even though he's a boy.

Soon, a bunch of kids from their neighborhood come by to see Angelica's ballet. Angelica uses her Cynthia workout tape for the music (which she thinks is better than the music Susie uses for ballet) and uses a bucket of water for the lake. The ballet doesn't go as Angelica planned, but surprisingly, all the kids, including Susie, enjoyed it. Susie asks Angelica to make a ballet for her, which Angelica (somewhat reluctantly) agrees to. Phil tells everyone to dance some more. Dil tries to reach the spilt bucket of water, but then a single raindrop falls on Dil's head and he says, “Wa-wa?” Meanwhile, the fathers of the Rugrats (with the exception of Phil and Lil's dad), determine that Stu's roof is fine, but then it starts raining. Most of the kids are still in the backyard, but they end up dancing in the rain to Angelica's Cynthia workout tape. 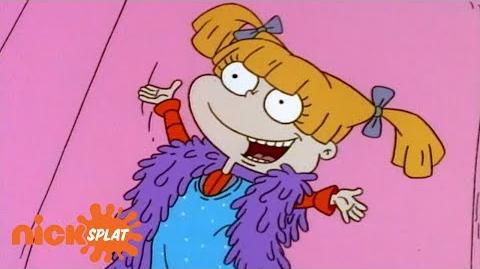 Cynthia Workout featured in 'Angelica's Lake' Rugrats NickSplat
Add a photo to this gallery
Retrieved from "https://rugrats.fandom.com/wiki/Angelica%27s_Ballet?oldid=336659"
Community content is available under CC-BY-SA unless otherwise noted.